What a great weekend for Riding Into History.  We went to the New Smyrna AMCA Sunshine Chapter Swap Meet on Thursday to set up.  Met Buzz Kanter for lunch and talked about all the exciting events leading up to Riding Into History!  Buzz’s Kickstart Only Ride from Charleston, S.C. to St. Augustine, FL. will be a great way to kick off our event.  There could be up to 12 Cannonball motorcycles from the 2010 and 2012 Cannonball races.  There were a least 5 Cannonball motorcycles at the AMCA Swap Meet this weekend. 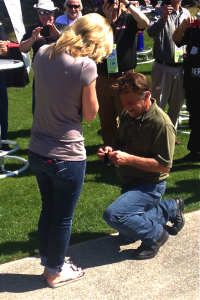 On Sunday, I went to Amelia Island Concours d’Elegance to see a beautiful display of Ducati motorcycles.  John Duss put together some exceptional motorcycles for show.  The highlight of the day was meeting Dale Walksler (from Wheels Through Time Museum) as he was showing an extremely rare 1949 post war BMW Veritas.  This car is one of the most rare cars in the world.  It is in original untouched condition.  It won first in its class!  That wasn’t the most exciting thing to happen.  During the Concours an airplane flew over the event with a banner flying behind it that read “Trish will you marry me?”  Dale proposed to his longtime girlfriend Trish!  Of course she accepted.

Meeting and spending time with Buzz and Dale this weekend let me know that we are going to have an exceptional event this year at Riding Into History.  Next weekend we’re off to the Daytona 200.  Stay tuned.