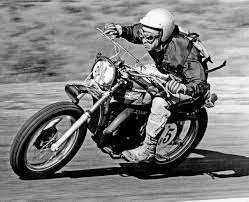 Riding Into History announces Motorcyclist of the Century, Malcolm Smith as the Grand Marshal for the 17th Annual Motorcycle Concours d’Elegance on May 21, 2016.  We will be featuring “Viva Moto Europa”.  Writer/author, Mitch Boehm will also attend as a special guest.  Malcolm and he have just finish the book,  Malcolm! The Autobiography.  Editor of Rider Magazine, Mark Tuttle will be covering Riding Into History this year.

But there was one name that was mentioned more often than all the rest, and that name was Malcolm Smith. Then as now owner of Malcolm Smith Motorsports in Riverside, California, Malcolm was a successful racer in the 1960s and ’70s, but he wasn’t a professional racer. Sure, the scenes in On Any Sunday of him winning the Mexican 1000 and the Elsinore Grand Prix, and earning a gold medal at the International Six Day Trials in El Escorial, Spain, painted a portrait of a Pro racer. But Malcolm never chased points; he simply competed in whichever events he thought would be the most challenging, and the most fun. More than anything, it was Malcolm’s ear-to-ear grin that endeared him to viewers, and made them (meaning us) want to ride motorcycles. Couple that with the fact that he still owns one of the largest dealerships in Southern California—stop in for a tour of the museum upstairs—and Malcolm may be responsible for putting more people on motorcycles than anyone else.”

Make sure sure you mark your calendars for May 21, 2016 to come see some great motorcycles and Malcolm Smith, the Motorcyclist of the Century!