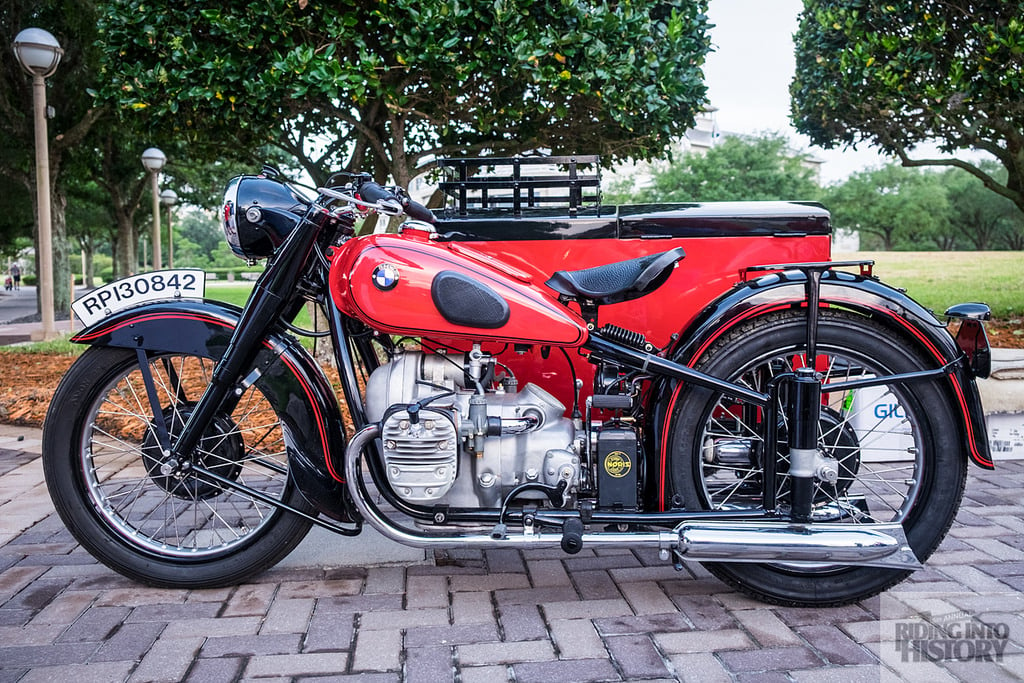 Spotted at Riding Into History is a series of posts on some motorcycles and owners seen at the most recent event. These may not be big winners, or mega dollar examples, but we hope you will find their stories of interest.

Jack Wells is a BMW guy, he bleeds blue and white. We’re not sure how many Beemers he has, probably north of sixty. His bikes have podiumed at two Cannonball Rallies, his show bikes are among the best in the world. In the early days of RIH, when we were in dire need of good motorcycles, Jack would fill a couple of huge trailers and bring as many as eighteen bikes.

This year Jack only brought one BMW, but what a machine. His 1938 R61 is outfitted as a Deutsches Postwagen, a mail delivery sidecar (seitenwagen). It’s a spectacular and imposing black and red motorcycle. But getting to look as it does was not easy. Jack bought the R61 back around 2007 and his friend Richard Sheckler set about restoring it. Richard became ill with the restoration nearly done, but requiring assembly. Lee Deyoung finished it, including fitting the sidecar.

The sidecar is another and fascinating story. They were originally built by the Royale company to the German Post Office specification. Royale has been out of business for many years, but the blueprints still exist at the German Post Office Museum. Jack arranged to borrow the documents and commissioned another German firm, Ideal, to build an exact replica. After eighteen months, the sidecar was finished and shipped to Illinois to be attached to the now complete R61.

The sidecar is full of tricks. The top lifts up to provide access to load the wicker basket. Then the rear opens to allow the basket to be wheeled out. Completing the outfit is a bugle so the rider can announce his arrival.

As this is written, Jack and the Postwagen are on their way to the BMWMOA National Rally in Salt Lake City. Typical of Jack, he needed to fill the trailer so there are three other Beemers going as well.

What does one do for an encore after this? Well, if things go as planned, Jack will be back at RIH next May with the BMW R67 Richter Cabine sidecar prototype.