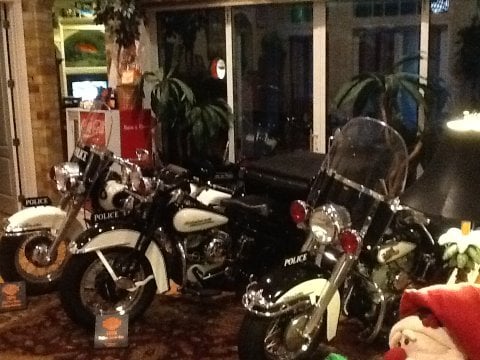 Here is a sneak peak of a motorcycle display we will be having at Riding Into History.  Gino Francavilla will be bringing 3 police motorcycles he purchased from a collector in Pennsylvania.  This display of police cruisers feature a 1953 Harley-Davidson Servi-Car used in San Francisco as metro patrol motorcycle with a sidecar, a 1961 Harley-Davidson DuoGlide Pennsylvania patrol motorcycle and a 1971 ElectraGlide California Highway Patrol (CHIP) motorcycle.  All of these motorcycles are restored back to factory original with dealer stickers.  Thanks Gino for such a great display of motorcycle police history!

Riding Into History is proud to support K9s for Warriors as our charity.  K9s for Warriors provides service canines to warriors suffering from post-traumatic stress disorder and traumatic brain injury as a result of injuries they received during wars and conflicts since 9/11. Their goal is to empower them to return to civilian life with dignity and independence. 95% of all K9s trained come from rescue shelters.  Visit www.k9sforwarriors.org for more information.

Remember you can buy one ticket get one free (BOGO) online at www.ridingintohistory.org.  For $10 you will receive two tickets to Riding Into History Motorcycle Concours d’Elegance.  All proceeds support K9s for Warriors.

Do you want to talk to us about Riding Into History?  We will be at the Fruit Cove Car Show on April 10, 2014.  We will have tickets and posters!  Look forward to seeing you there.