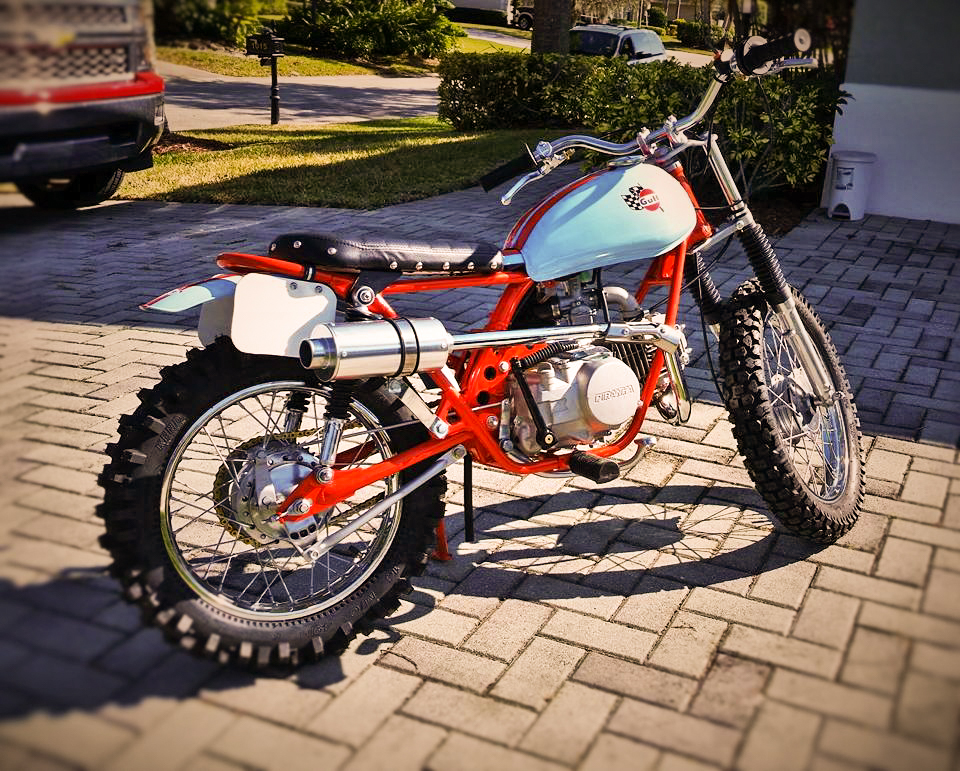 Our annual silent auction will be highlighted this year by a pair of motorcycles, a pair of wildly different motorcycles.

First we have the “Baby Warrior”, so named by builder and donor Toby Jones. Toby of OtC Custom Motorcycles is a well-known builder of café racers. He undertook construction of this Honda SL70 based mini-flat tracker as a donation to RIH, raising funds for the K9s For Warriors, our charity of choice.

Custom built from the frame up, the baby Warrior is finished in blue/orange as an homage to the great Porsche and Ford Le Mans cars of the same era. Of course, all that custom work resulted in a bike that, albeit small, looked pretty mean, so the puny 72cc motor was yanked out and a brand new 125cc with double the HP installed. Now she goes as well as she looks.

The successful bidder will own a unique, one-off vintage bike that will be a blast to ride. This could be the ultimate pit bike. And acceptance into next year’s Riding Into History is assured. 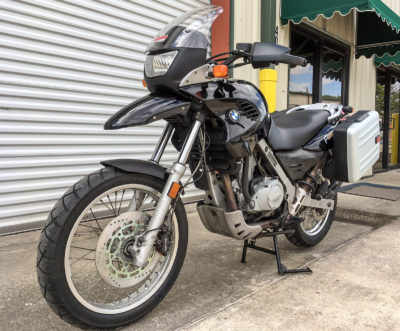 Our second auction bike comes from Norm Nelson, well known Cannonball competitor and long-time friend of RIH. Back in 2003 Norm owned BMW of Daytona. He bought this F650 for his wife Maggie. They subsequently toured extensively together. After Maggie passed away, the BMW passed through the hands of several members of his extended family. Norm has reacquired it specifically to donate for this auction, and ACE Vintage has refreshed the mechanicals and installed several new cosmetic parts that Norm also provided.

This motorcycle has significant personal meanings to many of us at Riding Into History. Maggie was an inveterate volunteer, always taking on any job that needed to be done. She was a very important team member in the early days of RIH. Having her motorcycle back now to once again assist us somehow closes the circle.

Bidding starts at the Grand Marshals Dinner, Friday, May 19th and continues until 2:45pm Saturday, May 20, 2017 across from the Charity Store at the Riding Into History Motorcycle Concours d’Elegance. The winner will be announced at the awards tent at 3pm.