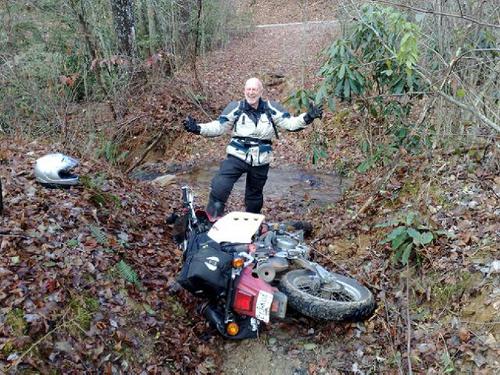 Riding Into History is excited to have Dave Despain as the 2014 Grand Marshal!

Dave Despain is the most well-known television personality in the motorcycle world.  He is considered the voice of motorcycle racing.  Dave has done almost everything in motorcycling from being AMA Public Relations Director, racer, motorcycle shop worker, journalist, promoter, AMA Pro Racing board member and is the founder of the Dirt Track Hall of Fame.

Dave’s first television gig was with ABC’s Wide World of Sports.  Dave then became involved with the Motor Racing Network announcing NASCAR.  After 10 years announcing for the AMA, he moved to Atlanta to star on Motorweek Illustrated, the first national weekly coverage of motorcycle racing on television.  Dave’s passion made motorcycle racing a major motor sport right along side stock cars, Indy cars and all the rest.

In 1990, Dave was offered a contract with ESPN to become its primary motorcycle announcer.  He negotiated that the network air a package of AMA Grand National dirt track races as part of the deal.  This was a major accomplishment!  During this time Dave also served on the AMA Pro Racing board, which helped make decisions that would guide racing into a new era of popularity.

In 1995, after announcing on ESPN for NASCAR, Despain was offered a chance to go back to motorcycle reporting with Speedvision Network.  He hosted weekly motorcycle programs “Bike Week”, “Motorcyclist”, and “Wind Tunnel”.

Dave promoted and inaugurated the Dirt Track Hall of Fame Race in 1998 with a $100,000 purse in Springfield, IL.  In 1999, Dave Despain was inducted into the AMA Motorcycle Hall of Fame.  He lives with his wife Wendy and their dogs, cats, various other animals, and a selection of motorcycles in Athens, Georgia.