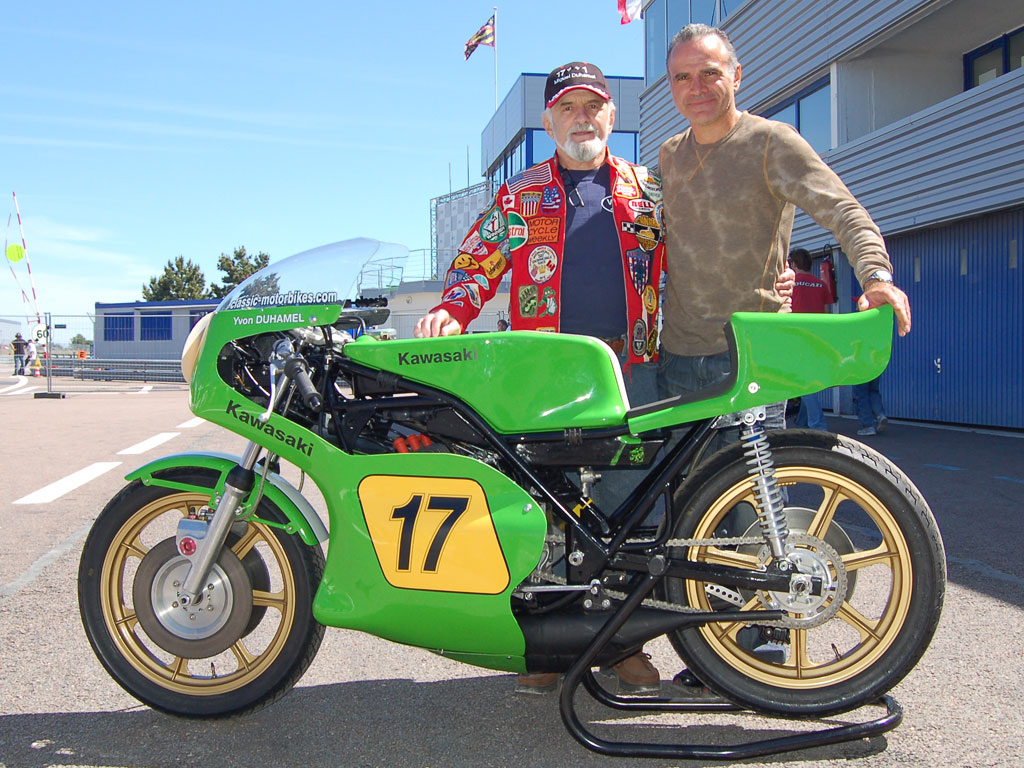 Yvon and Miguel Duhamel will join us on May 20 as Grand Marshals at Riding Into History. We could not have hoped for better GMs; celebrating Japanese motorcycles, we have two men who spent nearly forty years racing, and winning, on Japanese equipment.

Yvon began racing early, starting on a BSA Gold Star. By 1968 he was on a Yamaha, finishing second in that year’s Daytona 200 he scored the first ever two-stroke podium at the big track. Yvon is most closely associated with Kawasaki. He joined their team in 1971 and immediately gave them their first big win, taking the Superbike race at Talladega aboard the fearsome 750 triple. Yvon raced with them in the US and Europe through the 70’s, running everything from production racers to GP bikes, everywhere from Loudon, NH to LeMans.

Yvon never officially retired, he simply stopped actively participating as he concentrated on the careers of his sons Miguel and Mario. In 1988, all three of them raced as a team at the Bol d’Or 24 hour race.

In 1999 Yvon Duhamel was elected into the AMA Hall of Fame, fittingly the same year as what is generally regarded as Miguel’s greatest race. In late 1998 Miguel crashed badly suffering very severe leg injuries. He came to the spring race at Daytona still on crutches where after a race long duel he defeated Mat Mladin by .014 seconds, the closest ever 200.

Miguel began racing in the 80’s and much like his father, he got his first professional podium on a Yamaha 250. In the 1990’s he won the Daytona 200 a remarkable five times. In all Miguel won 86 AMA races. He was the AMA Supersport champion five times during the same period.

Yvon is most associated with Kawasakis, and many remember Miguel for his successes on Hondas, but he competed successfully on a number of others. His first Superbike win was on a Yoshimura Suzuki, he raced a season in Europe on Yamaha France 250GP, and gave Harley Davidson’s ill-fated VR1000 its best outings.

Like his dad, Miguel never retired, and this year joined him in the AMA Hall of Fame.

At Riding Into History Miguel will be signing autographs and posing for photos with a pair of motorcycles similar to those raced by he and Yvon. Stop by and say hello to a legend.

Oh, about the #17? Both Duhamels ran the same number throughout their careers, for nearly forty years.