Each year we try to provide a few displays of motorcycles that fit a theme or tell a story. This year we have more than ever before, a half dozen displays totaling over thirty motorcycles.

Kicking off, we will have a dozen survivor motorcycles, principally from Anthony Napoli. These will include motorcycles many will recall as their first bike, lots of small Japanese 50-90cc rides. Let the reminiscing begin.

Jim, Sharon and Logan Dillard are back from Virginia for the third year with yet another assortment of rare and desirable Italian race bikes. We guarantee there are models here you’ve never heard of, let alone seen at a public event.

Frank Lipinski will again bring four Triumph Bonnevilles, each a limited edition built in honor of the Queen of England. Each of the eligible models have previously won Best in Class awards.

There will be a group of four Spanish Bultaco Metrallas, representing each variation the factory produced between 1962 and 1978. These motorcycle are being shown courtesy of the MotoEuro Garage Collection. 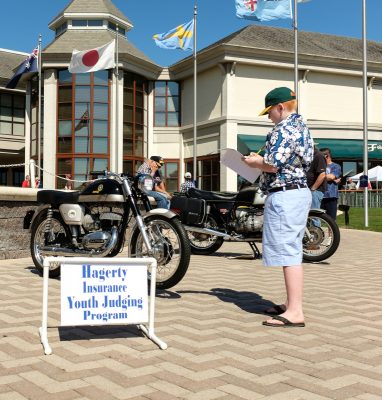 Finally, the popular Hagerty Youth Judging will return again this year. This group is not yet complete but will certainly include a couple of past class winners, including a Honda race replica and a rare Moto Martin based special. In addition, last year’s auction bike, a Kawsaki with great history will be shown along with as many as five or six others.