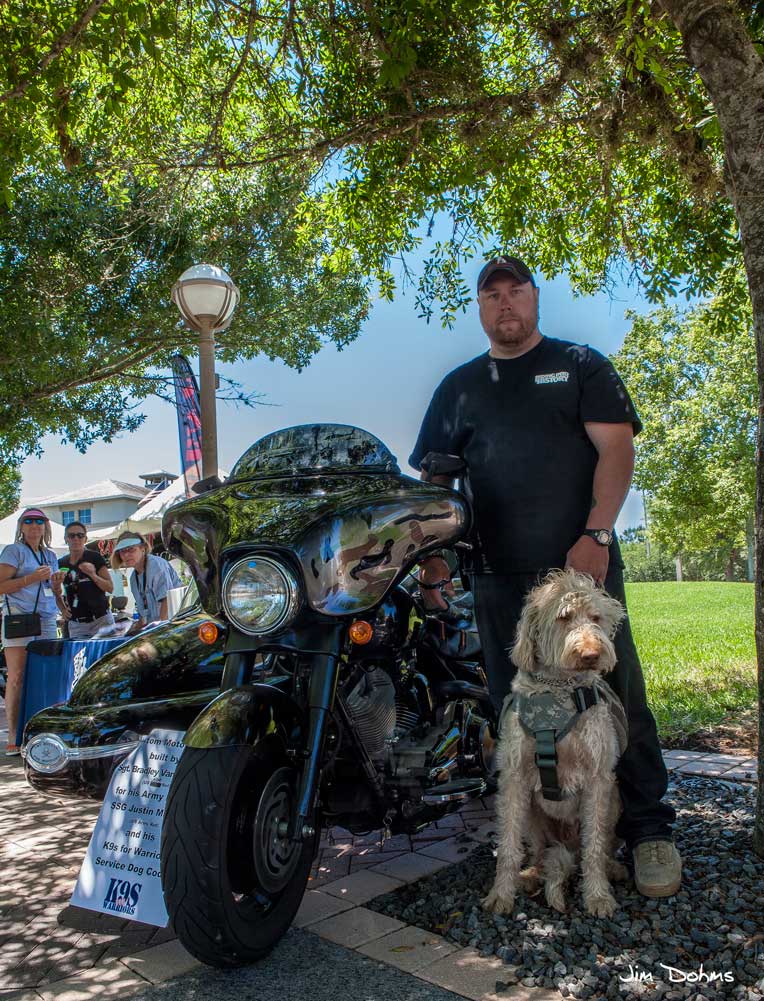 It was another fantastic year at Riding Into History! The 15th annual Riding Into History was a great success. The Grand Marshal Historic Ride, the Grand Marshal Dinner and the Motorcycle Concours d’Elegance were all lots of fun. The weather was spectacular, and couldn’t have been better. We could not have asked for a better Grand Marshal in Dave Despain. Also having special guest of honor, Nobby Clark made our event extra special. The icing on the cake was the Barber Vintage Motorsports Museum exhibit! 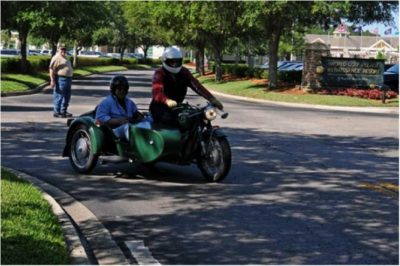 Riding Into History started on Friday morning, May 16 with the Grand Marshal Historic Ride to Corky Bells in Palatka, FL. The weather was sunny and a perfect temperature. The ride was sold out with over 50 vintage motorcycles. Dave Despain rode Cindy Hill’s 1989 Honda TransAlp. Justin Madore and his service dog Cody, graduates from K9s for Warriors joined the ride. Justin and Cody rode in his Harley Davidson with sidecar (Cody in the sidecar). Two Wheels for Warriors built this motorcycle for him., Everyone had a great lunch and ride!

The Grand Marshal Dinner was held at the Legends Grill at the Slammer and Squire in the World Golf Village. The food was home-style comfort American and was delicious. Our Grand Marshal Dave Despain was introduced, as was guest of honor Nobby Clark, and special guests from the Barber Vintage Motorsports Museum, Brian Slark and Jeff Ray. Recognition was given to sponsors and the Dusty Miller Award for Generosity was given to the Jacksonville Beach Chrome Divas for their years of service to Riding Into History. Dave Despain regaled us with his stories of 39 years of riding motorcycles. He was engaging, honest and very funny. The silent auction was a success and raised funds for the K9s for Warriors. It was a wonderful evening.

Saturday morning appeared with gorgeous weather! The 15th Annual Riding Into History Motorcycle Concours d’Elegance opened with the fanfare of hundreds of beautiful classic, vintage and antique motorcycles. There were over 20 exhibitors and clubs informing motorcycle lovers about all different aspects of motorcycles. Our charity, K9s for Warriors represented their organization with Justin, Cody and his Harley Davidson sidecar. 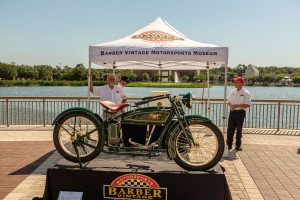 The Barber Vintage Motorsports Museum had a beautiful display of 9 very rare motorcycles. Their display included a 1926 Ace 4 cylinder in mid-restoration, a 1914 Indian electric start original and operational motorcycle! They also brought a 1961 Honda RC161/4 GP, a 1979 Yamaha TZ750 E, ex Henry DeGouw, (Henry was at Riding Into History this year!), a 1969 M.V. Agusta 250 twin scrambler, a 1973 BSA/Triumph Dick Mann Daytona replica, 1967 Moto-Guzzi ISDT, a 2000 Lakewood custom, and a 1994 Harley Davidson VR1000. This was the largest display that the Barber Vintage Motorsports Museum has ever brought to any event! Riding Into History was very honored to host this display. 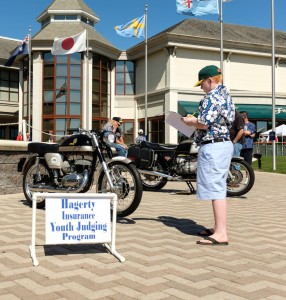 Riding Into History started a Youth Judging Program, sponsored by Hagerty Insurance. Buck Carson, (Cannonball 2012finisher, motorcycle collector, writer, mechanic and all things motorcycle related), led our team of youth judges. We are excitedto continue this program as it is important to teach our youth the historical value of motorcycles!

In addition to the Motorcycle Concours d’Elegance, two charity rides rode to the concours on Saturday. Sponsors, Adamec Harley Davidson and BMW Motorcycles of Jacksonville both had rides from their dealerships. K9s for Warriors graduate Justin Madore rode in the Adamec ride with his service dog Cody. It was a beautiful day for these charity rides!

Each year, our goal is to organize a world-class event and give a donation to a worthy charity. This is our first year contributing to K9s for Warriors. With all the help and support from our sponsors, exhibitors, volunteers, and spectators, we will be able to make a record donation to K9s for Warriors.  The Weaver Foundation has pledged to match our donation.  Stay tuned for the announcement of where and when the donation will be made.